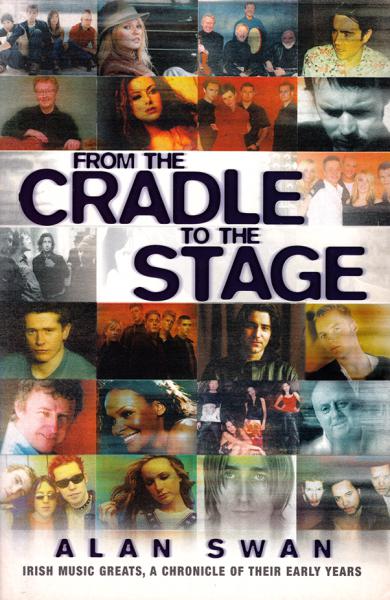 From The Cradle To The Stage

From the Cradle to the Stage by Alan Swan is one of the most exciting books on Irish music to be released in years and proceeds from its sale will go to Fighting Blindness. This publication is expected to be the ultimate stocking filler for Irish music lovers this Christmas. From traditional to classic and from rock to pop it has something for everyone with a wide variety of artists including The Corrs (Jim Corr), Damien Rice, Juliet Turner, The Devlins, The Frames, Moya Brennan, Ronnie Drew, James Galway, Frances Black, Samantha Mumba, Christy Moore, The Cranberries (Fergal Lawler), The Chieftains (Paddy Maloney), Paul Brady, Ronan Keating, Westlife (Mark Feehily), David Holmes and Ash contributing directly.

In the last few decades Irish music has made an extraordinary impact globally and it is timely therefore that this chronicle allows Irish artists from every music genre to share with us the memories of what has helped shape their success. To their great credit, the musicians who have co-operated in this publication have chosen to do so in a way that will be an extraordinary help to the only Irish charity funding research to find cures for blindness.

Fighting Blindness has been in existence since 1983. It is a small but dynamic charity made up of families and individuals affected by progressive blindness. The charity is determined to investigate every avenue where a realistic hope of finding a cure exists. The projects it funds are at the cutting edge of international research and have become global leaders in the search for treatments for blindness. 65,000 Irish adults and children are currently losing their sight to progressive blinding conditions known as retinal degenerations. Funds raised through the sale of this book will ensure this vital work is maintained and developed, bringing hope of a bright future to those currently affected by blindness and to future generations.

24-year-old author Alan Swan worked in commercial radio and TV as a presenter after studying in NUI Maynooth. He's now working behind the scenes in music research for Tyrone Productions/RTE programme 'Openhouse'. Having built a reputation as a broadcaster passionate about supporting new talent, Alan recently won a 'New Irish Music Industry Award'. This is his first book.

From the Cradle to the Stage will be available in bookstores from November 12th and also online, across the world at www.poolbeg.com but you can order your copy directly from Fighting Blindness by calling Eamonn on 01 709 3050 or e-mail eamonn.carroll@fightingblindness.ie.

No Song of the Day available